Here's a better picture of my "nutcracker" BHN tester, "homemade tester #2" or "HT2" for short. 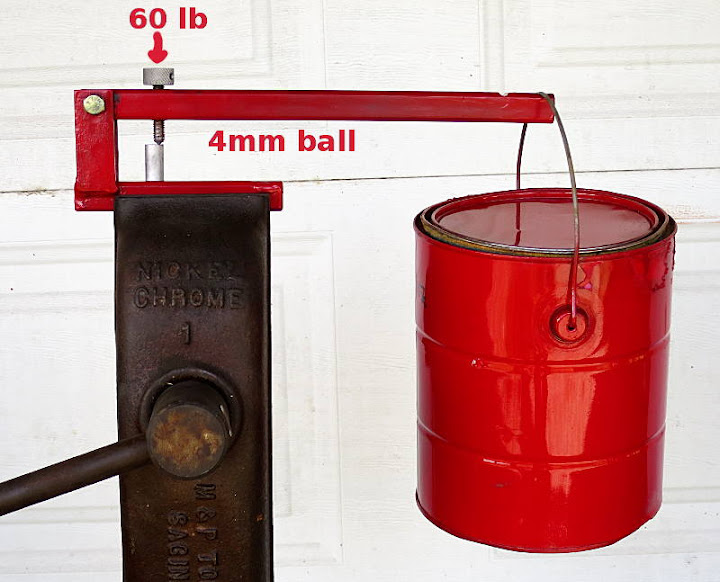 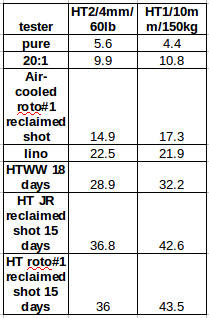 And here's a graph of that data. The two homemade testers roughly agree below 25 BHN, then diverge on the heat treated samples. Which tester is closer to the truth? I dunno. Digital measurement of the indentation is pretty accurate, so the weak link is any error in the applied force due to friction losses or due to error in measuring the leverage. 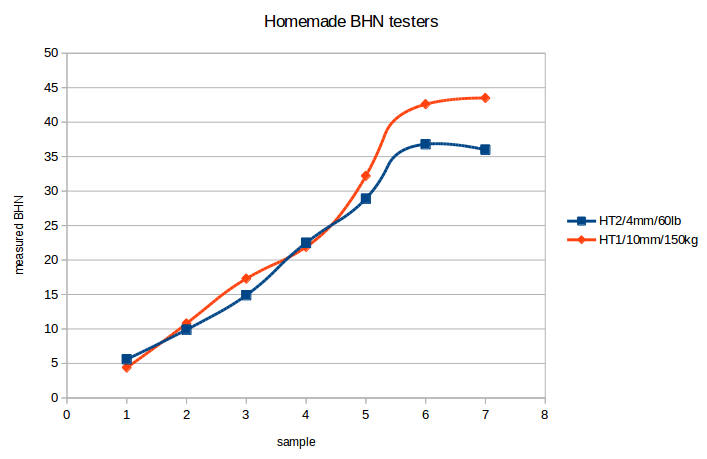 In an effort to better understand why a 10mm test seems to read higher BHN than a 4mm test, I did a side-by-side comparison using the "cylinder sandwich" method with both 4mm and 10mm balls. The cylinder sandwich method eliminates any error due to applied force because both samples receive exactly the same force and it cancels out of the BHN equation. The only remaining error is in how well you can measure the indentations, and that error is negligible using digital photo measurement.

Here is the equation I used with the cylinder sandwich method. Note this may be different than an equation pitched by the NRA. It's late at night and I'm tired so feel free to check my math and tell me if you find a mistake. 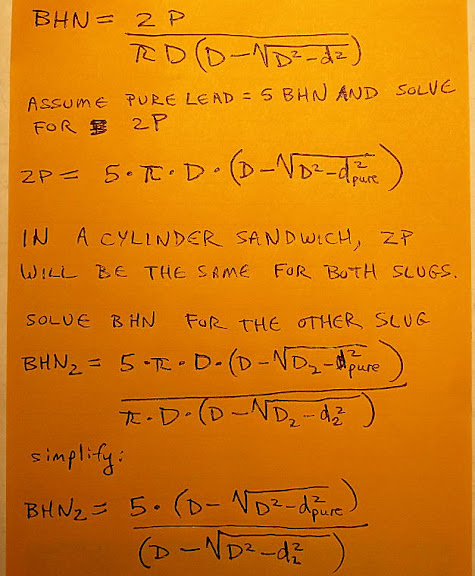 I made a gadget to hold two 4mm balls in the center of the 1/2" slitted pex. 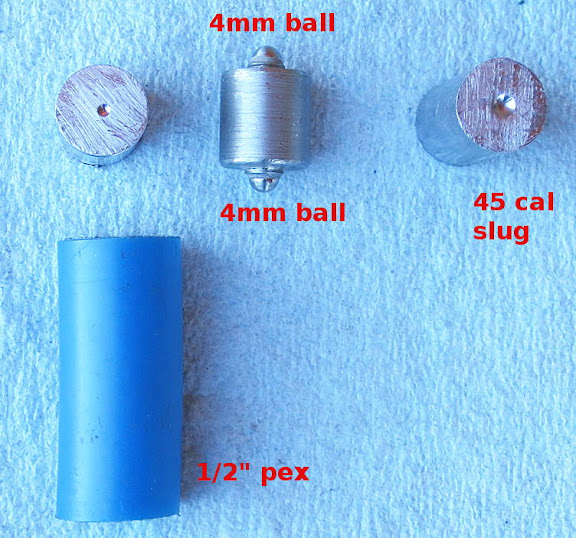 The test results graphed. As you can see, the 10mm ball read higher than the 4mm ball, more so on the harder bullets. I don't know why this is so, I only know that the results are repeatable so it appears to be a fact of life. 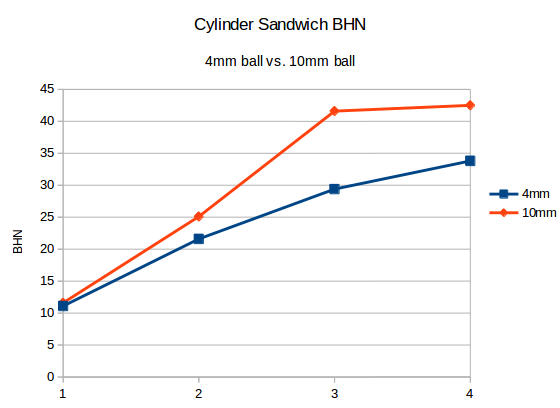 Which is more correct? Well, if you believe that 20:1 should be 10 BHN and linotype should be 21 - 22 BHN, then the 4mm results look reasonable while the 10mm results look too high. At this moment I have no explanation but I'll continue to investigate.
Top

I wanted to try the pencil method just to say that I tried it.

The name brand pencils that were recommended: 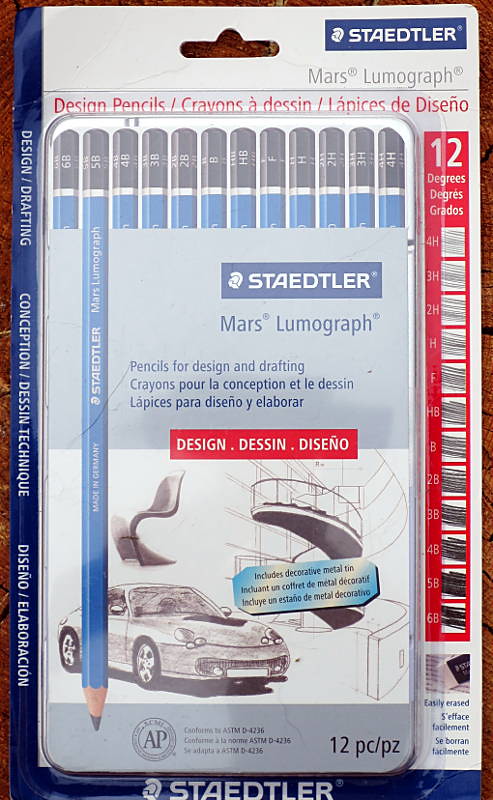 Correct me if I'm mistaken, but I gather that the general ideal is to attempt to scratch the bullet with the pencil? If the pencil merely rubs, then the bullet is harder than the pencil. Try the next step harder pencil until you find one that scratches. The softest pencil that produces a scratch rather than a rub is the hardness of the bullet.

At first I tried scratching the filed meplat of my cylindrical slugs. The resulting mark was indistinct -- I couldn't tell whether it was a rub or a scratch. It actually looked like a little of both.

I tried again on the smooth side of the cylinder, instead of the filed meplat, and that worked much better. The smooth as-cast surface provided more contrast than the striated filed surface.

I found it necessary to use a magnifying lamp to discern the scratches. Your eyes may fare better.

Basically my scratch results agreed with the chart below, except my heat treated reclaimed shot did not produce a distinct scratch until 3H.

Like many hardness tests, the pencil test seemed to work better on soft alloys than on hard alloys. On heat treated bullets, there were sometimes several shades of grey between rubbing and scratching. Super precise it is not, but as others have noted it does give ballpark results for not a lot of money. 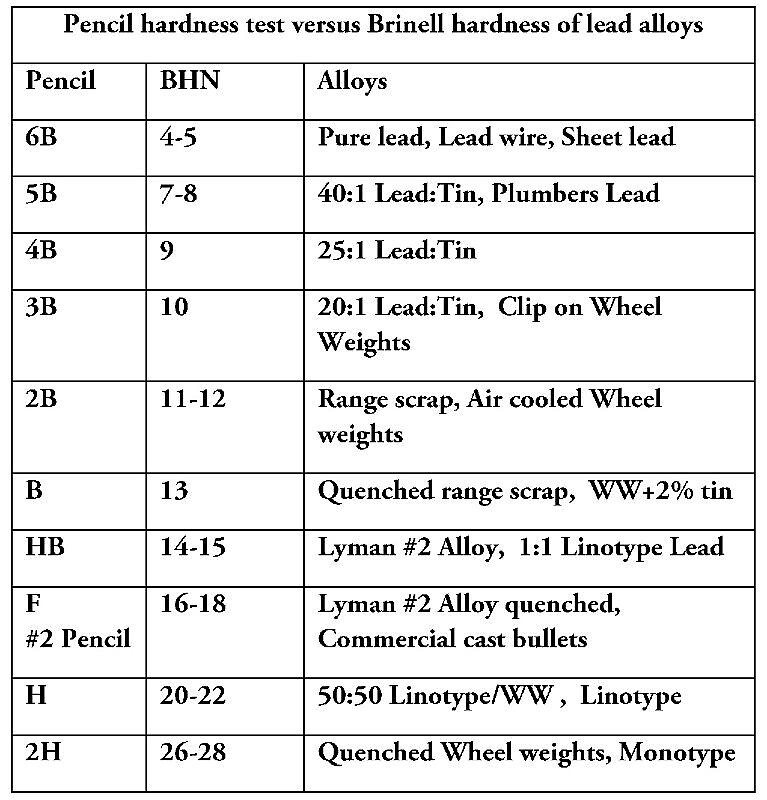 Just a note that we featured your clever Brinell Hardness Tester in our HomemadeTools.net newsletter, fully credited to you of course, and properly linked to this thread: http://mailchi.mp/homemadetools/lathe-c ... copic-feet

From the first comment posted on your build listing, it looks like you are already gaining some fans among our forum visitors.

I hope we've been able to bring you lots of traffic. Cheers.

For softer alloys, this method may be overkill. While my homemade 4mm tester is easy to use, and more compatible with small caliber bullets, on hard (25+ BHN) alloys its indentation becomes little more than a pinprick, and small measurement variations of the pinprick results in big variations in BHN. Hence I've decided to favor the 10mm test for hard alloys. The 4mm test will probably be reserved for small caliber bullets, particularly air-cooled bullets.
Top
Post Reply
25 posts