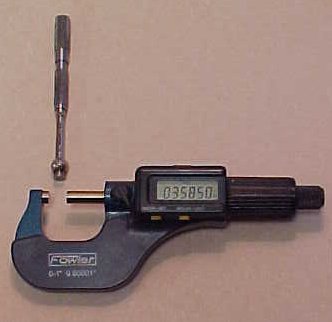 Here are some things you might want to consider when choosing a revolver bullet.

Size the body of the bullet to fit the throat or a little bigger   The easiest and most accurate way to measure the throats is with an expanding ball gauge (imported sets are available for less than $30, and they also come in handy for measuring the bore of a barrel).   Other methods include cerrosafe, driving a pure lead slug through, or using bullets or cylinders of a known diameter as go/no-go gauges.   Some of these methods have a tendency to err on the small side, which is one good reason to size the bullet 0.001″ over.

Nose length  In other words, how much of the bullet sticks out of the case?   Measure, and leave yourself a little wiggle room.   Maximum length noses make sense on very heavy bullets, where you have a surplus of bearing length and a shortage of powder space.   On lighter bullets, you might benefit from the added bearing length and the added grease capacity that a shorter nose will give you.   Do not assume that more powder space is always a good thing and that deep seating is always a bad thing.   Velocity does not increase proportionally to powder space.

Front band length (does not apply to ogival flat points)   90% of wheelguns will accept a full diameter front band that is 0.100″ long.   But it varies.   My Ruger Speed Six 357 will only take a 0.080″ front band.   A customer’s S&W; 500 will take a 0.130″ front band.   A cerrosafe casting will give you this measurement.   If you don’t have cerrosafe, you might be able to use the backward bullet method.   Make a dummy round with a bullet loaded backwards.   This bullet’s diameter needs to be slightly larger than the throat diameter.   Gradually seat the backwards bullet deeper until it just barely chambers.   The amount of bullet sticking out of the case is your maximum front band length.   Select a front band length that is a little shorter than this maximum.   If the front band is too short, accuracy may suffer.   If the front band is too long, the bullet may not chamber easily.

Front band length on ogival flat points   Let’s say your wheelgun’s chamber is long enough to accept a full diameter band that is 0.100″ long.   So you think you can specify an ogival flat point with a 0.100″ long front band.   WRONG!   Because the beginning of the ogive will be pretty close to full diameter.  When you add in the “fat” part of the ogive, your 0.100″ long front band may appear to be 0.150″ – 0.200″ long, and it may be long enough to bump into the throat and cause chambering difficulty (by the way, many of the bullets sold by commercial casters get around this problem by having an undersize front band or by having a secant ogive instead of a tangential ogive).   How do you figure out how much of the ogive is fat enough to be a concern?   Well, it depends on the ogive radius, and the front band’s as-cast diameter, and your throat diameter, and …… it’s pretty darned complicated.   Let’s use my Ruger 357 as an example of how we might deal with this.  The Ruger will accept a full diameter front band that is 0.080″ long.   I make the body of the bullet 0.359″, but the front band drops out of the mold at about 0.357″.   Since the Ruger’s throat diameter is 0.3585″, that 0.357″ front band can be plenty long and still chamber reliably.   Does the slightly undersized front band hurt accuracy?   It shoots well in my Ruger.   It may actually help accuracy by allowing the front band to be longer, so the bullet doesn’t have to jump as far before hitting the rifling.   Remember, the front band’s main job is to guide the bullet straight into the barrel and to grab the rifling.   It doesn’t necessarily have to form a perfect gas seal — the rear of the bullet is supposed to be providing the gas seal.   There’s a lot to be said for a tapered and/or undersized front band on ogival flatpoints for wheelguns.   We’re talking 0.002″ – 0.003″ undersize.

Another way to deal with the front band on ogival flat points is to use the bore ride option to create a slight step where the ogive begins.   Going back to the example of the Ruger 357, make a bore riding ogival flat point with a full diameter 0.080″ long front band, followed by a bore riding section that is 0.001″ long (just a gimmick to create the step down) and 0.356″ diameter.   Of course, this is not a true bore riding bullet, but that is beside the point.

The throat should be equal to or slightly larger than the barrel’s groove diameter.  Some recently manufactured wheelguns have throats that are smaller than the barrel.   This is a no-no for cast bullets.

The forcing cone should have a gentle angle or even a Taylor throat.   Most modern wheelguns do, but many older guns have a steep angle.   If you have such a gun and if you have tried all the usual tricks and still can’t get it to shoot plain base bullets, you may need to re-cut the forcing cone with a 5° or 11° angle.   If you don’t want to fix the forcing cone, a gas check bullet may help.   Bore riding bullets may also help with these steep forcing cones.   The bore riding section may help to align the bullet in the barrel before the front band slams into the rifling.

Bullet Hardness  I will probably ruffle a few feathers here, but so be it.   Much is made of having a BHN that allows the bullet to “bump up” to correct diameter.   Indeed, if for some perverse reason you must shoot undersize bullets, then by all means, use a soft alloy that will bump up to the correct diameter.   But if the bullet is the correct diameter to begin with, it does not need to bump up.   My “good” wheelgun will shoot either air-cooled WW (BHN 12-14) or heat-treated WW (BHN 30) equally well.   Some of the not-so-good wheelguns that I have owned showed a preference for hard bullets, and particularly liked hard bullets with a gas check.

Something that may bite you if you have big throats   If your gun has unusually large throats, say 0.433″ on a 44 mag (actually not all that unusual) and you attempt to chamber a 0.434″ bullet, you may find that the case mouth diameter is too big to chamber easily.   This problem can be aggravated by the heavy roll crimp required for some pistol powders, because a heavy crimp may create a slight bulge.   My S&W; 44 does this to me sometimes.   When it happens, I can usually solve the problem by backing off the crimp die slightly or by running the loaded rounds into a 308 die to size away the bulge formed by the crimp.   I have heard that the Lee collet crimp eliminates the bulge.   If all else fails you may have to turn the necks on the cases.

The special case of the S&W; 500   The S&W; revolver’s cylinder can accept a nose up to 0.700″ long, but several things have to be considered when using a very long nose.   One, the body of the bullet may be too short to provide adequate lubrication and bearing length, so you may need to shorten the nose to gain a grease groove or two.   Second, if the long nose is unsupported, it may not be accurate.   Third, if the long nose is full diameter, it may be difficult to chamber.   There are a couple of ways to have your cake and eat it two.   You can use a long bore riding nose (about 0.489″).   Alternatively, go with a long bore riding nose that is about 0.498″.   You can even get fancy and make the bore rider taper from 0.488″ to 0.499″.   Either way, the long bore rider allows the bullet to chamber easily yet provides support as soon as it hits the barrel.

Stability with fat metplats   Be aware that anytime the metplat gets bigger than 75-80%, stability may be an issue.   The traditional formulas for computing stability, like Greenhill’s formula or the McGyro program, fail to predict the stability problems that sometimes occur with short, blunt revolver bullets.   In fact, long blunt bullets may actually stabilize better than short blunt bullets, due to improved aerodynamics.   Adding a small dimple or a mini-nose to a full wadcutter may improve its aerodynamic stability.

Two crimp grooves   I do not offer two crimp grooves on the same bullet, for numerous reasons.   The typical application calls for one crimp to be located 0.050″ deeper than the other.   Well, you can’t get there from here.   They have to be spaced further apart.   A special cutting tool is required.   When the bullet is seated in the lower crimp groove, the front band may be too long.   So you have to have an undersized front band.  But when the bullet is seated in the upper crimp groove, the front band may be too short.   It would be very difficult for me to write a computer program that could figure all these things out.   What are we supposed to gain for all this trouble?   I used Quickload, an internal ballistics program, to estimate the potential velocity gains in a 357 mag loaded to 33000 psi.   It suggests that changing the seating depth by 0.100″ has almost no effect on velocity in a short-barreled revolver after the powder charge is adjusted to maintain the same 33000 psi.   In a long barreled revolver, you can gain 50 fps.   In a rifle, 70 fps.  Big deal.

Computer-generated data for 357 mag at 33000 psi
Previous
Next