Getting a Grip on Grooves 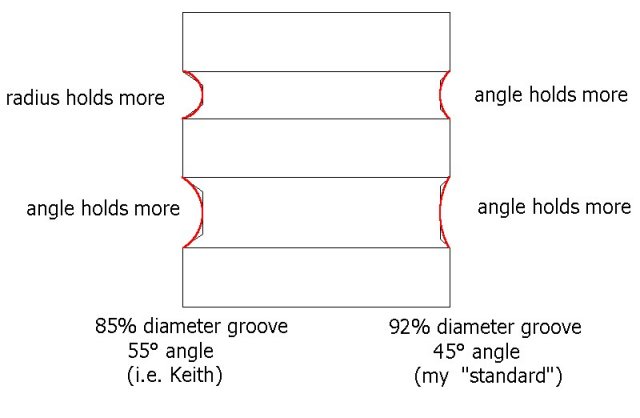 Grease grooves   …. perhaps my least favorite subject.   Here’s the deal: every bullet caster has their own pet theory about grease grooves.   One guy believes that radiused grooves are better because they sling grease.   Another guy thinks flat bottomed grooves are better because they don’t sling grease.   If only the dumb mold makers would listen and make the grease grooves the way grease grooves ought to be made, the bullet would posess magic qualities, it would shoot straighter, and it would never lead the barrel.   There’s just one problem — no one, to my knowledge, has ever done any scientific studies to prove any of this.   I’ve started to do a few experiments on grease groove shape and size, and so far, it doesn’t seem to matter, as long as the rifling lands don’t bottom out in the grooves.   But it will take a whole lot of experiments to prove anything, if indeed, there is anything to prove.

My Humble Opinion   When I am choosing a bullet for one of my guns, I spend a lot of time thinking about how to make the bullet a snug fit in the throat yet still feed and chamber and extract reliably.   I don’t spend a lot of time worry about grease grooves.   I have had good luck and bad luck with radius grooved bullets and likewise with square bottomed groove bullets, so I never saw any reason to prefer one style over the other.   I haven’t had a great deal of luck with Keith bullets, so I am a little suspicious about the Keith grooves, but even so, I try to keep an open mind.   Maybe someday I’ll own a gun that prefers the Keith grooves — it just hasn’t happened yet.

Grease Capacity   As you can see in the picture, flat bottomed grooves usually hold more grease than round bottom grooves of equal depth.

Over-lubrication   As any experienced caster knows, bullets sometimes shoot better if some of the grooves are not filled with grease.   And bullets that hold lots of grease, like the Keith bullets, may not shoot as well as bullets with moderate grease grooves.   Don’t assume that more grease is a good thing.

Leading the barrel   Leading is caused by gas cutting, because the bullet is not forming a good gas seal, or because of damage to the bullet due to a rough barrel or throat.   Lubricant may help in these situations, but it is better to eliminate the root cause of the problem.

To Sling or Not to Sling   Has anyone done any scientific tests on whether or not it matters if the grease gets flung out of the groove?   And if it does get flung out, where can it go?   If the bullet is sealing the barrel properly, the grease is trapped, and it can’t go anywhere, except for a few molecules here and there.

Ease of manufacture   It’s a lot easier to lathe bore an angled, square bottom groove rather than a radiused groove.   It is difficult to lathe bore very deep grooves.   So most of my bullets, except for the Keiths, have grooves of moderate depth, angled sides, and a flat bottom.   Most of the other brands of lathe bored bullets, like Lee and LBT and Mos, also use grooves of moderate depth.   Most of these bullets with moderate grease grooves shoot just fine.

Data Point: No Excuses Muzzleloader Bullet   The No Excuses muzzleloader bullets have an excellent reputation for accuracy, yet the ones I have examined have very shallow grooves.   For example their 0.503″ bullet has 0.018″ deep grooves, compared to 0.022″ for my 500 caliber centerfire bullets and 0.027″ for my Whitworth bullets.   So maybe, just maybe, deep grease grooves are not necessary, or even desireable, not even in muzzleloaders.

Ease of casting   Shallow grooves are easier to cast than deep grooves.   Grooves with angled or radiused sides release from the mold easier than grooves with steep sides.   One time I made a Keith mold with a truly square grease groove, just like Elmer wanted, and I’m here to tell you that bullet did not want to let go of the mold.   It didn’t shoot worth a darn, either.

G forces on bullet lube   According to Quickload software, my 357 load accelerates forward to the tune of 140,000 g’s.   By contrast, the centripetal acceleration caused by bullet spin hits a “mere” 150 g’s in that load (if I did my math correctly, and feel free to check my math, cuz I was in a hurry when I crunched those numbers).   The forward acceleration may be the primary force acting on the lube while it is in the barrel, especially during the first few inches of travel, when chamber pressure is near the peak and the bullet is very susceptible to gas cutting.   (in addition, the lube behavior may be impacted by intrusion of the rifling lands into the grease space, gas blow-by, and bullet obturation).   As the bullet makes it’s way down the barrel, the forward acceleration decreases and the centripetal acceleration increases.   Centripetal acceleration may or may force the lube against the barrel, depending on how sticky the lube is.

Note that making the groove longer increases the lube pressure, but groove depth and groove shape do not enter the equation.   243 psi may sound like a big number, but it’s not, really.   It may take a lot of pressure to move some hard bullet lubes.

How to Take Advantage of Forward Acceleration?   How about a 2-angle groove like this?   The “wedge” would combine with the forward acceleration to push the lube into the barrel/bullet interface.   This is not a new idea, and maybe it wouldn’t really make any difference, but it sounds good in theory.

Effect of Obturation of Lubrication
The grooves may be deformed by obturation, and presumably this would pressurize the lube.   But I usually shoot hard bullets that don’t obturate much. 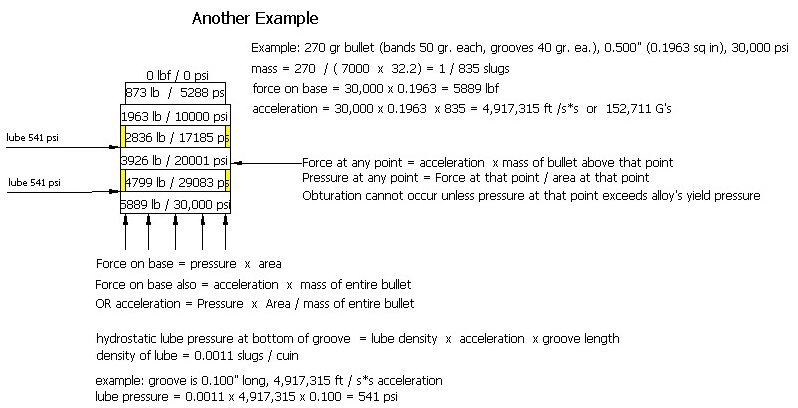 Effect of Engraving on Lubrication
When the rifling engraves the bullet, surely it must displace some lube from the groove.

Grease on recovered bullets   Anyone who has taken the time to examine recovered bullets knows that it is not unusual to find fired bullets that still contain grease in the grooves.   Is this a good thing or a bad thing?   Well, maybe it doesn’t matter, because the grease can’t get flung off until the bullet exits the barrel, and I’m more concerned about what happens while the bullet is inside the barrel.