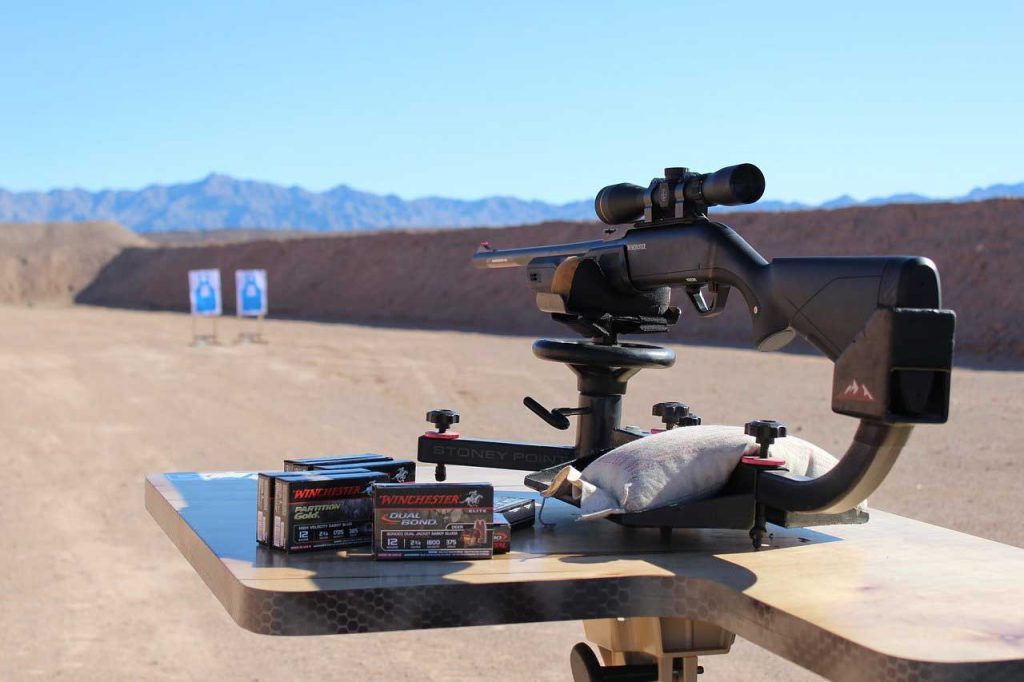 60% bear fat, 40% beeswax   average 7.1″, 1218 fps.   Barrel condition was normal for this load — a little grey color near the muzzle, but nothing to complain about.   This is a very soft lube, about right for muzzleloaders.

Rooster Red HVR   average 5″, 1241 fps.   I chose this lube because it is a typical hard “crayon” lube, and I wanted to see what a crayon lube would do.   Barrel condition was perfectly clean — the first time this gun has ever been perfectly clean with a plain base bullet.   The velocity was higher than the other lubes and the difference was statistically significant, according to my Statistics for Shooters program.   The average ES was 41 fps, and while I didn’t record the ES for the other lubes, I think they were closer to 60 – 80 fps.

Conclusions   I don’t think the differences in accuracy were significant, because every group had 4 shots in 3″, which is as well as I can shoot this gun.   Rooster Red HVR had better velocities and a cleaner barrel, perhaps because it is less affected by gas blow-by.   Perhaps the crayon lube is acting like an o-ring and actually forming a gas seal, or perhaps it is merely more resistant to being blown off the bullet by leaking gas.   In any event, I was impressed.

165 gr. 50% Taurak / 50% beeswax   average 4.2″, 2756 fps.   A little grey wash at the muzzle.   The first group was the smallest and the last group was the largest, suggesting that fouling was an issue.   The groups were strung vertically, and the velocity was lower than expected, which points to a gas seal problem.   The velocity started out at 2766 and gradually dropped to 2744 fps, which might be an indication of barrel fouling.

165 gr. Liquid Alox / mica dust   average 4.05″, 2793 fps.   Two rounds refused to chamber because case neck OD was too big.   Several other rounds required undue force to chamber.   The liquid alox bullets had been loaded in brand new cases, which may have a thicker neck than the old cases that were used for the other lubes.   The velocity showed a lot of shot-to-shot variation, but did not trend downward like the other lubes.   Bottom line is — accuracy and velocity were better than the others. The first group had 3 shots in 1/2″.   Those three were difficult to chamber, due to the tight neck fit.   The two fliers chambered easily.

Conclusions   The light SWCs were an attempt to achieve high velocity without high pressure.   They did shoot very cleanly, but not accurately.   As for the lube tests, consider that my old standard, Wonderlube, ran into trouble at 2700 fps and would only shoot 7″ with significant fouling.   All of the lubes tested today were an improvement over Wonderlube.   I give liquid alox the highest marks because it gave the highest velocities, suggesting the best gas seal, and the velocity did not trend downward, suggesting the barrel condition was relatively stable.   I think the 165 gr. bullet still wants a better gas seal in the chamber neck.

Conclusions   This gun just doesn’t like the light SWCs.   The liquid alox did best today with the 165 gr., but not as well as the old standard Wonderlube (1.4″) or NRA lube (1″).   The liquid alox also produced higher velocities than the other two lubes, though the difference was not significant.