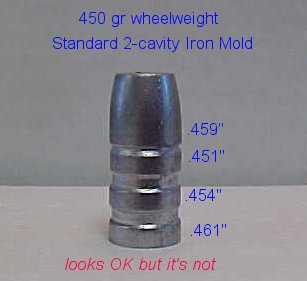 Shrunken Bullet Syndrome (SBS)   where part of the bullet is frosty and undersized.

Things That May Help

In Search of the Holy Grail of SBS fixes   I keep looking for a surefire solution but haven’t found it yet.   In general, I’ve had the best luck by using WW and an RCBS ladle with the orifice drilled out to 5/32″.   For a while, I thought low pot temperatures were part of the solution but then I ran into a couple of molds that had SBS at low pot temperatures but cast fine with the pot turned up.

For I while I could not make wheel weights do anything wrong.     Then I switched from using a ladle to using a $49 bottom pour pot, and I also switched to a different batch of wheel weights.   Uneven patches of frost started showing up, and a little bullet-to-bullet diameter variation.   And then, severe SBS on a 450 grain bullet in the standard size iron blocks.   Darned!   Update:   Good News!.   I retested the 450 grain iron mold, this time using a ladle instead of the $49 bottom pour pot, and a sprue plate with 3/16″ holes instead of 1/8″ holes, and got about 87% yield!   The ladle was an RCBS that had the hole drilled out with a #21 drill.   The pot temperature was around 625°.   Yippeeee!

It does happen with half lino/half wheel weights.   Typically, a mold will cast good bullets at the beginning of a casting session with this alloy, then, as the mold warms up, certain band(s) will be frosty and undersized.   On some molds, this can be avoided by keeping the pot temperature below 600°.   Other times I have made decent bullets with this alloy by casting hot enough to make the entire bullet frosty.   I have also gotten satisfactory results by letting the mold sit open for several minutes between pours.   In one extreme case involving a 420 grain bullet, I had to dip a corner of the mold in water for a couple of seconds after every other pour.   I often use 50% lino to cast 7mm and .357 bullets, but it seems to be a poor choice for big bore bullets.

SBS may occur with WW + 2% tin   See the article on WW + tin.   It is hard to generalize because molds are like people, no two behave exactly alike, but adding tin to WW may not be helpful on heavy bullets.   Maybe I’m just strange but I prefer straight WW for handgun bullets and heavy rifle bullets.

I have not seen SBS with straight linotype at moderate temperatures.   I don’t test that many molds with straight linotype, but those that I have tested, cast shiny, well filled bullets.   Now, one of my theories is that SBS is caused by tin oxidation, so why doesn’t SBS occur with linotype?   Perhaps the good fill properties of linotype outweigh any problems caused by tin oxidation.

Pure Lead seems immune from SBS.   Pure lead thrives on a hot pot and a hot mold.   Pure lead bullets are never frosty, because pure lead doesn’t grow big crystals like antimonial alloys, and it doesn’t oxidize as easily as tin.   That should give us a clue about the cause of SBS.

SBS is definitely related to bullet size and to mold temperature.   The bigger the bullet, the more likely it is to have SBS.   Other observations reinforcing the importance of mold temperature: 1) the first few bullets made at the beginning of a casting session will be shiny and the diameter will be correct, but then as the mold warms up bullets start shrinking, and 2) dipping the bottom corner of the mold in water for a couple of seconds between pours often makes the SBS go away.

Good venting helps but does not eliminate, the problem.   A 9.3mm steel mold was made with no vent lines.   It cast perfect bullets with tin-free wheel weights but had zero yield with 50% lino due to a shrunken bottom band.   Then shallow vent lines were cut on one side of the mold (cutting vent lines after the cavities are bored creates burrs and is normally not recommended).   After cutting the vent lines, the yield increased to about 20% with the 50% lino.   I was impressed by the fact that venting made a notable difference, and started cutting more and deeper vent lines on all molds.

SBS happens with iron, steel, brass, and aluminum molds.   Even though the thermal properties of the different materials varies considerably, SBS has been observed with every mold material.   Aluminum is the best and iron is the worst, with regards to SBS.

Bigger blocks may not eliminate SBS.   After experiencing the shrunken bullet syndrome with a 420 grain, 45 caliber bullet, the bullet design was recut in extra large (2.25″ long) aluminum blocks.   Other than a few good bullets cast while the mold was lukewarm, the XL blocks still made shrunken bullets with 50% lino.   Bear in mind that the XL blocks are only 28% longer than the standard blocks, so we can only expect a 28% improvement in cooling.   This same mold made perfect bullets with straight wheel weights and it made perfect bullets with straight linotype.

Is frost bad?   There may be two kinds of frost.   If you cast hot with a tin rich alloy like 20:1 or Lyman #2, the bullet will often have a dull, hazy appearance.   Or you may see white color around the edges of a band.   Maybe this “powdered sugar” frost is tin oxidation.   On the other hand, if you cast hot with an antimony rich alloy, like WW, the bullet may have a grainy look.   I’m pretty sure the grainy kind of frost is caused by the growth of large crystals called dendrites.   The slower the bullet cools, the bigger the crystals grow.   One theory holds that the crystals inhibit the flow of liquid lead while the bullet is in the half solid/half liquid “slush” state, and that may contribute to fill problems.   As long as the diameters are correct, the frost is harmless.